My presentation at UXlibs II

Since my award-winning talk* at the recent UXlibs II conference, other delegates who did not attend my talk have very kindly expressed interest in my presentation. A special shout out to the nice man whose name I have forgotten, who asked me if I would give the talk again on the Friday, like I was the winner of the Eurovision or something. ”God, I hope not!”, I thought to myself. Anyway, in this once in a lifetime English blog post I thought I would take you through a short version of my talk. Normally I always put my presentation slides on Slideshare, but in this case the slides need so much explaining and context that I thought a written story (with lots of pictures!) would be a better option. I say short, what I actually mean is different. I will explain what my (or rather, mine and Åsa’s) presentation was all about, but also add some bonus comments and materials that ended up on the cutting room floor when I prepared the presentation. A director’s cut, if you will. Here we go!

*Now there’s a sentence I never thought, etc, etc. Thanks a lot to everyone who attended and extra thanks to those who voted for me. I’m equal parts embarrassed and chuffed. 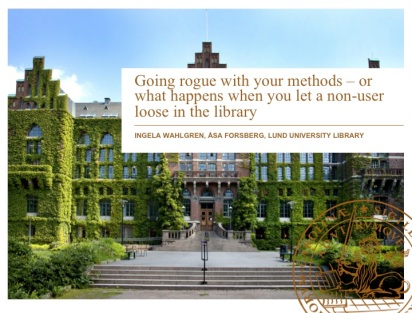 So, during the autumn semester 2015, the team that I belong to at Lund university library conducted a larger study on our library space usage with a mixed methods approach. The aim was to create a decision basis for developing the library space. My colleague Åsa Forsberg and I then sent an abstract to the UXlibs II call for papers, and here we are. By the way (Donna), we were not sure at all which headline out of Nailed Failed Derailed we were supposed to choose, and even asked Andy’s advice. We settled on Nailed, since we are very happy with our UX methods and research itself, we learned lots, both about the library and about the methods themselves. If our conclusions and suggestions will actually cause bigger changes in our library space is yet to be determined, and if this is how you measure success (and maybe this is how you should measure it, in actual change achieved), then we might still end up as Failed or, even worse, that cat with a dead bird in its mouth that Lawrie talked about. However, I don’t think things are quite that black and white; some of our suggestions will very likely happen or start to happen in the near future and others will be executed in one form or another in the future.

As I mentioned, we used a mixed methods approach and that included everything from more traditional focus groups, comments from our 2014 LibQual to cognitive maps and observations, both quantitative and qualitative. Pictured above is our graffiti board, which has become quite popular among our visitors and will very likely stay up for the foreseeable future. It has proved an efficient way of finding out simple things that are broken or malfunctioning in the library.

Now for some background on our library building. The picture above shows the main entrance to the oldest part of our building; it was built in 1907. Here I asked the audience at UXlibs what they thought of when they saw this and they said, with more or less one voice/murmur: Hogwarts (School of Wizardry and Witchcraft, famous from the Harry Potter books). This is also what showed up time and again in our user studies, this is what people think of when they see the outside. That’s nice, in a way, but maybe also not so good because…

….once inside the first time visitor is usually disappointed, since it’s more ”old factory conversion from the 90’s” inside than anything else. Oh, and here you can also see part of that famous reference desk, in total 19 metres across and suspected of possibly being the largest reference desk in all of Northern Europe. Again, I’m not bragging, I’m just saying.

The above was just to give some context to the main course of the presentation, which was mainly about the one touchstone tour that we managed to conduct with a non user, or first time visitor, if you will. We did ”regular” touchstone tours as well, but we opted to write our abstract with focus on this one tour, since we thought it might be a bit more unique but also because we got such rich results from this one tour.

Åsa first got the idea when we were planning for our study and were talking about the touchstone tours. I think I initially was a bit sceptic, if nothing else because of the challenge of finding a non user in the first place. But ever the optimist, Åsa convinced us  and we decided on a few strategies for finding those ever elusive non users. We had already been in contact with some student union representatives that had participated in one of our focus groups. (Or was going to, honestly not sure of the timeline here.) A request was sent to these students. We never heard from them again.

We did plan for other ways of finding a none user, one way we thought of was to ask our colleagues at the faculty libraries, perhaps they would meet library users who had never visited the University library. However, we started busying ourselves with all those other methods that you have seen listed earlier, and just never got around to it. Finally one, day, an opportunity revealed itself. A girl contacted us for a Book a librarian-appointment and revealed in her correspondence with Åsa that she had never been to our library, by asking for directions. Åsa then asked me if I was willing to conduct the tour after the appointment if this girl agreed to participate. I was and she did , and off we went:

We start at the entrance, with the rule that she should not ask me for help. She starts running in to the library, looking for a ”quick search computer”…

She runs past some of our computers, saying that they look like they are for sitting down and working and printing and stuff…

She turns around, still running… 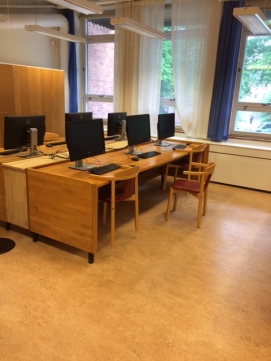 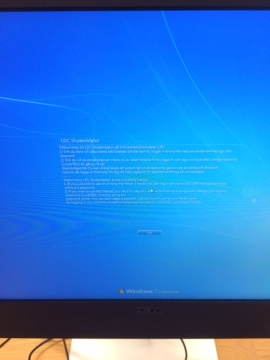 When following instructions (press ctrl+alt+del to log in) she gets this prompt, which she doesn’t read. No one ever does, obvs. (This fine print gives away how to access the library catalogue without actually logging in.)

Our brave first time visitor now decides it’s time to ”give up” and asks for help at the reference desk. Here she then gets both a library card and a computer account.

Back at the computer, she now tries to log in. But she presses the nice big button several times just to get this result:

asking if she wants to ”switch user” (considering no one is logged in at all right now, why would we want to??)

At this point I decide to step in, even though I am not supposed to. I tell her that she shouldn’t press that nice big tempting button, since it actually says ”switch user” and that is not what she wants to do. Finally, she gets in to the computer…

And a browser opens and shows her our website. 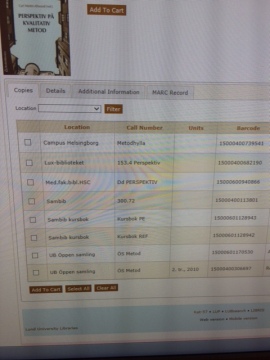 From there, she quite easily finds and searches our catalogue. She finds a book she wants and carefully writes down the call number, which includes the letters ÖS, short for Öppen Samling, our Open Collection

I’m not sure how exactly, but she finds the signs that point her in the direction of Öppen Samling

And then patiently walks up three flights of stairs

She runs in to the room, looking around at our shelving signs, trying to find the right location. When she turns around and says she is going to go downstairs to get help, I intervene for the second time.

I show her our map of the space, where call numbers are colour coded. She says she has already noticed the map, but it doesn’t say ÖS anywhere? I intervene again and explain that those first letters are not part of the call number. She then immediately gets it… 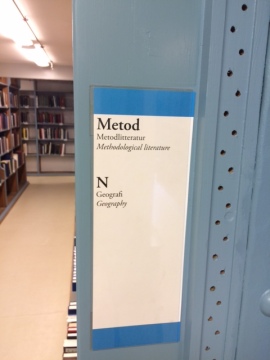 …and finds her shelf and several books that she borrows successfully in our self check out machine (bookomat, remember?) 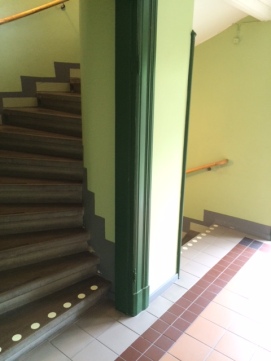 A final interesting thing happens on the way out. She hesitates when we get to the staircase, and starts going upstairs to go out. I even ask her: so you feel like we should go up to go out? She says yes, it must be. It’s not until she reaches the next landing that she realises this was not the way out, and starts going downstairs.

I think this happened because we have no signs anywhere pointing towards the exit or towards the reference desk, or anywhere else for that matter, once you have gone deeper into the library.

On our way out, I think to ask her what she thought about all of this, did it go ok? She says ”just fine!”, which I did not question out loud but found quite surprising, especially since her journey through our library took 45 minutes in total (I know this because that’s how long my audio recording was).

As you can tell, we learned a great deal about how our library works, or doesn’t work, through this one tour, and I really believe that some things we would never have thought about had we not seen them in this tour.

Finally, a few lessons learned in general from our UX research: 1) you do not need lots of respondents/participants, you can learn a great deal from just a few people (see above); 2) ask people in person -gives a much higher response rate than traditional ways of recruiting; 3) finding none users takes effort/time and/or luck. Also, as I said during the question round after my talk, I think it is easier to recruit and also get a ”good” result out of a participant that has some kind of self motivation. The girl I followed around the library wanted to become a library user, she was there on her own initiative. It doesn’t make much sense to me to ask someone who just isn’t interested at all in your library to come and try and borrow some books, why would they? Maybe if you can offer a really nice incentive. We only had cinema tickets on offer, so I am quite glad we were lucky with our first time visitor.

If you made it all the way to here, thanks for reading! Please comment if you have a question, otherwise you are also welcome to contact me at ingela.wahlgren AT ub.lu.se or @ingyplingy on twitter. I will attend and also give a talk at the Library Assessment Conference in Arlington, Virginia 31 October- 2 November,  maybe I’ll see you there?

4 kommentarer on “My presentation at UXlibs II”

This site uses Akismet to reduce spam. Learn how your comment data is processed.